Volunteers participate in various research based activities within the National Parks. Please note that some activities, and some research methodologies, are seasonal and you may not be able to take part in every activity during your stay: 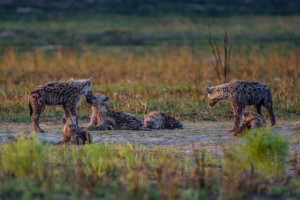 We are currently assisting with the execution of a large predator survey in Zambezi National Park, assessing habitat occupancy of selected large predators (lion, spotted hyena, cheetah, leopard and African wild dog) within the c. 56 200 hectare Zambezi National Park. Predictions of the species’ distribution are collected and confirmed with sign detection data generated from within specified survey areas. Alongside our wildlife trust ALERT, we have been conducting this survey since 2013 and in 2015 it was discovered that hyenas are currently contributing 70.2% of evidence, with 9.5% lions, 17.4% wild dog and 3% leopard. Our volunteers alongside researchers from ALERT still continue to carry out this survey.

Large mammal carnivores play an important role in maintaining a balance between the game population and the environment. However, when carnivore numbers increase, certain age classes of the ungulate population can be negatively affected. Spotted hyena, contrary to poopular thought, do hunt extensively and prey mainly on the juvenile age class of game (although they will also take down adult animals). Spotted hyena are most common and abundant large mammal predator in many African ecosystems and in Zambezi National Park and the surrounding areas are no different. It has been reported that this area suffers from a shortage of a juvenile age class in large ungulate pouplations such as zebra and wildebeest, this is due to a large spotted hyena population. To date, no studies have been carried out on spotted hyena in the area and ours, alongside researchers at ALERT, will look at the pouplation dynamics of the species in the areas mentioned to obtain pouplation size, population dynamics, recruitment, home-range, prey preference and interaction with livestock.

The interaction between lions and hyena will also be studied as these two species are major competitors and are known to limit population growth within their populations. This study will be undertaken as a joint project between the Parks and Wildlife Management Authority of Zimbabwe, the African Lion and Environmental Research Trust and Lion Encounter and is expected to last at least three years. At the end of the study management recommendations will be presented to ZPWMA. At the present moment, the project is monitoring a clan, located in the south western part of the park, with their movements being monitored on a daily basis. The project also intends to monitor another clan, ideally, in the northern region of the park and if resources permit the purchase of GPS collars will assist in gathering more precise data on the movements of these spotted hyenas in and around the Zambezi National Park.

Leopards are the most widely distributed wild cats, and occupy a broad variety of habitats, from rainforests to deserts and from the fringes of urban areas to remote mountain ranges. With large, wide-ranging carnivores such as leopard, it is important we understand more about their movements and ranges. In Africa, leopards inhabit over 40 countries, ranging from Senegal to South Africa, with the sub-Saharan population size estimated at 714 000. Although this is widely considered to be an over-estimate, the leopard is not currently considered endangered in sub-Saharan Africa. However, regional populations are increasingly threatened by habitat fragmentation and degradation, as well as persecution by local people to protect livestock. The population ecology of leopards is not known within the Zambezi National Park and this study, executed by ALERT, seeks to investigate the population and distribution of leopards in the Zambezi National Park mainly focusing on ecological characteristics such as home ranges and movement patterns. This study will determine the above and the foraging patterns for individual leopards using data obtained from the radio and/or satellite collared individuals. 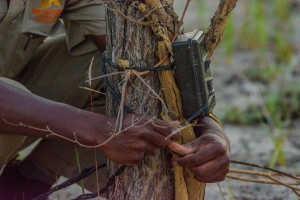 Human-wildlife conflict (HWC) in Zimbabwe sees numerous herds of livestock lost to lions. Farming communities without access to other methods of income generation can be devastated by the economic effects of predation. In an attempt to mitigate these problems, ALERT is facilitating the installation of lighting systems on livestock bomas within communities – an effort supported by Lion Encounter. These lights are installed following an assessment plan to establish the impact of this lighting system in controlling the HWC within communities. ALERT has also acquired more lighting systems that will be able to carter for about 20 homesteads. Camera traps have also been availed and they will be used to capture footage on how the predators behave when they approach these lights. The challenge however still remains on the daytime attacks which constitutes almost 40% of these attacks.

This project involves the counting of large mammal species upon driven transects and has been ongoing since the 1970s with a database of sightings on established transects being kept and trends monitored. This data also gives an indication of population changes in terms of numbers and age sex ratios over time. Over the years this process has helped the park managers decide which management tools to use to ensure equilibrium in this ecological system. It is hoped that continuing this monitoring study ALERT in partnership with the Zimbabwe Parks and Wildlife Management Authority (ZPWMA) and Lion Encounter will ensure that appropriate conservation management plans for large mammalian species can be developed and implemented. While the densities that are obtained in the analysis, of the data obtained by this project, are not absolute densities, they are a reliable index that can be used as a surrogate for the real densities encounter rates and abundance kilometric indices of large mammals in the survey area.

This Second Southern African Bird Atlas Project (SABAP2) is currently the most important bird conservation project in the southern African region – it is the pillar of conservation initiatives for birds on this part of the continent. With the first having run between 1987 and 1991, this “second” bird atlas project started on 1 July 2007 and plans to run indefinitely with the help of partners like Lion Encounter and ALERT. ALERT’s Principal Researcher in Victoria Falls is a part of the citizen scientists who are making a huge contribution to the conservation of birds and their habitats as they work to identify birds around Africa. Data collected during the bird atlasing is sent through to the animal demography unit (ADU) at the University of Cape Town.

There is hardly any need to demonstrate the benefits of taking insects into account when managing a natural ecosystem such as a naturla park, because insects make up a dominant part (greater than 80%) of the biodiversity of terrestrial ecosystems. As a result, insects can be good indicators of ecosystem quality and managemetn impacts on habitats. From the smallest among them to the biggest, from the most insignificant to the most spectacular, they are thus a heritage that we cannot ignore. With this in mind, ALERT’s entomology survey has identified over 240 insect species within the Zambezi National Park and is in the process of creating a database for these.