Meet the lions in Victoria Falls…. 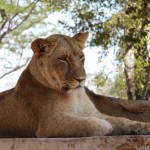 Despite being smaller than her brother, what Pendo lacks in size she makes up for in personality. This dynamic cub is the supreme hunter of the pair – always keen for a stalk and a chase. She is lighter in colour, but those dark eyes will catch sight of any game while out on walks and she’ll burst into action!

Phezulu is our main man here in Victoria Falls – with a flourishing mane and a growing stature, he is a sight to behold! Larger but lazier than his sister Pendo, Phezulu is a laid back guy who enjoys outings and hunting but also frequent naps in the bush. 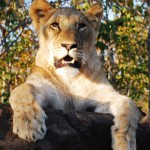 Vithikazi is a beautiful lioness with dark colouring and a large build. Her long face and spotted forehead distinguish her greatly from Fumani, her walking partner. Despite hesitating when approaching prey, ‘Vithi’ is becoming a confident cub when she’s able to follow Fumani’s lead on a hunt. 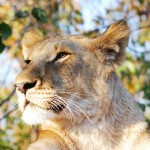 Fumani is an active cub, who has set herself apart from her sister Vithikazi as the main hunter of the pair. Despite her smaller size, Fumani has become a successful huntress of the bush. Not only this, Fumani has strong social behaviour and often initiates play with objects and Vithikazi. It’s never a dull moment with Fumani on a walk!

Follow our social media sites for updates on the cubs as they mature into seasoned hunters.[iscmd_ytv]